Alzheimer’s disease is a serious medical condition that causes a condition of dementia or acquired dementia. This problem radically changes the life of both a sick person and his family and friends. This ailment is considered the most common type of dementia. More than 1.5 million people suffer from this disease in Russia alone. Symptoms and signs of Alzheimer’s disease at the initial stage of the development of the disease are minimal and difficult to distinguish. With this problem, a person has problems with memory, behavior and thinking, since the brain ceases to correctly perform its main functions.

Symptoms
With age, people begin to forget some things and details. However, these are natural processes that are associated with age-related changes in the structures of our brain. In Alzheimer’s disease, the person develops symptoms that are not natural. The manifestations of the disease interfere with leading a normal life, performing daily activities. The following symptoms and signs indicate the development of Alzheimer’s disease: 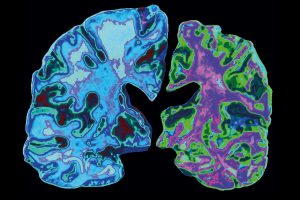 Problems with recognizability of places, people, objects;
Complete or episodic memory loss;
Distance from relatives;
Sudden changes in mood and character;
Problems with restoring the sequence of events;
Inability to make a decision on your own;
Change in visual perception.
As the disease progresses, the symptoms will only get worse. At a later stage, the disease causes the appearance of hallucinations. The patient develops delusional states, he can hardly recognize close relatives or friends. In addition, over time, problems with movement are added to the above signs. People with this diagnosis develop a characteristic “shuffling gait”. In the future, the patient will not be able to move at all on his own, without the help of others. Sometimes a person with Alzheimer’s disease also has seizures.

First signs
As a rule, relatives and close friends of a person are the first to notice strange changes in his behavior. In this case, the patient himself may not see any problems for a long time. Unlike many other diseases, the first symptoms of this ailment do not appear immediately after the onset of changes in the brain. The disease progresses for a long time without manifesting itself. Experts note the following early signs of Alzheimer’s disease:

Moderate forgetfulness;
Repeating one word several times in a story;
Inability to concentrate on one thing;
Negative attitude towards changes, even small ones;
Disdainful attitude towards your appearance;
A patient with the first signs of this disease may ask people the same question several times. He may forget what he ate, where he walked, or who he saw today. Quite often, people with Alzheimer’s disease get lost even in familiar places. Signs of a developing ailment will also be mood swings that occur for no apparent reason. Most often, a person suddenly becomes aggressive and irritable.

Causes
According to statistics, most often people who are over 65 years old suffer from this disease. The first signs of the disease may appear after 45 years. For over a century, scientists have been trying to determine the causes of Alzheimer’s disease. However, science has not yet been able to give an exact answer to the question of the etiology of the disease. Experts put forward a large number of different theories, but there is no consensus. In their opinion, changes in the cerebral cortex can be caused by:

Bad heredity;
Infectious diseases;
Pathological immune reactions;
Brain trauma;
Toxic effects on the body.
It is not known what exactly causes the process of destruction of brain cells. At the same time, long-term studies have helped to determine which categories of people are most vulnerable to this disease. The risk group includes:

Persons over the age of 65;
People who have relatives with Alzheimer’s;
Persons with moderate cognitive impairment;
Suffering from cardiovascular diseases;
People with head injuries.
In addition, research has shown that highly educated people resist disease longer. This is due to the fact that their brains have a large number of neural connections between cells. However, in the future, these people experience a more rapid progression of symptoms. It is also associated with many nerve connections that are affected almost simultaneously.

Which doctor should I go to?

Many people do not pay attention to changes in the patient’s behavior, attributing them to age-related changes. However, the emergence of persistent forgetfulness or problems with thinking should be the reason for urgent medical attention. People with such problems should seek advice from doctors such as:

The doctor will conduct a conversation with the patient, listen to complaints from his relatives. Also, the doctor will definitely ask a few questions:

How long ago did the first signs of the disease appear?
Has the patient received traumatic brain injury?
Does it suffer from chronic diseases?
Does a person forget what he ate, where he was?
Does his mood often change?
Did close relatives have similar problems?
Does the person experience difficulties in performing tasks that were previously easy for him?
To clarify the diagnosis, as well as to determine the causes of the onset of Alzheimer’s disease, a comprehensive examination of the patient helps the doctor. The patient will need to take a blood test, undergo an ultrasound scan of the vessels of the neck and brain, electroencephalography and computed tomography. In rare cases, a lumbar puncture may also be prescribed. Only after receiving all the research results and their careful analysis, the doctor has the right to confirm the diagnosis.

Effective treatments
Modern medicine is unable to stop the development of Alzheimer’s disease. The development of a drug that could suspend or overcome this ailment is being carried out all over the world. However, a truly effective treatment has not yet been invented. But doctors are still able to improve the condition of people with such a disappointing diagnosis. There are medications that can help alleviate the symptoms and signs of Alzheimer’s. Patients suffering from this ailment are prescribed:

Cholinesterase inhibitors;
Memantine;
Antipsychotics.
The doctor prescribes the intake of these drugs in a strict dosage, which is strictly prohibited to exceed. Since a patient with Alzheimer’s disease suffers from memory loss, relatives or loved ones should make sure that he takes medications. Today, there are nearly 400 drugs in development that are aimed at combating the disease. They are currently undergoing various clinical trials that would confirm their effectiveness.

Today there are many support services for people with this condition. Volunteers and public organizations help relatives cope with patient care, inform them about the peculiarities of the disease.